We have adopted a "zero tolerance" policy and have put in place a comprehensive program to deal not only with websites offering fake Christian Louboutin® products, but the sources thereof, the distribution systems, the auction sites and other avenues of trade in the fake products. 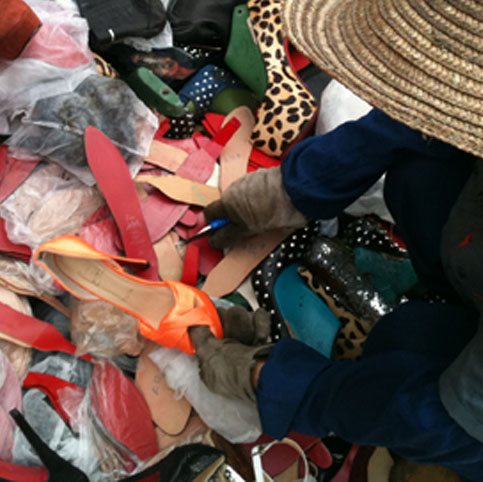 Keep in mind that when something looks too good to be true, that's usually what it is worth. Websites selling very low priced Louboutin® looking shoes (so called “Cheap Louboutin” or “Louboutin Outlet”) are probably not selling the real thing.

Use good sense. Protect yourself. Buy via our authorized retailers.

Numerous websites are selling shoes which illegally infringe our Intellectual Property rights. Even if we initiate various actions in order to limit their number, websites appear and disappear every day. The below search engine is thus at your disposal.

We monitor dozens of platforms worldwide and take down auctions and classifieds offering fake Christian Louboutin® goods for sale on a daily basis.

We work closely with Police forces alongside with Google Bing Baidu Yahoo! and others to identify sellers of fake Christian Louboutin® shoes. Our program has already taken down thousands of websites adverts both sponsored and unsponsored links eventually redirecting Internet users to sellers of counterfeits.

Our program uses our IP rights - especially Copyright Law - to get hosting providers shut down websites stored on their servers which we identify as selling fake products and violating our IP rights. We have compliance in large measure in many countries stretching from the United States to Panama Korea Japan and China.

When we find a website that keeps coming back we file actions seeking a formal cancellation of its domain name or other similar action with the various bodies that by international agreement have the authority to literally wipe a site’s web address off the books or force a domain name registrar to do so.

Blogs and other social media

The bad guys are clever: they use blogs that really are just another way to lead Internet users to websites selling fake goods. We take them down. We also monitor social media such as Facebook Twitter Tumblr Instagram Weibo or Pinterest where counterfeit dealers try to sell their merchandise. When we discover such profiles we get them removed.

Our trademarks are registered with Customs services throughout the world. Those services are supported through constant training and dialogue with our Counsels and ourselves. Collaborations follow.

We maintain a large number of field investigators around the globe who follow up on all information we receive regarding those who sell fake Christian Louboutin® products. The investigators turn information over to our Counsels who under our direction act on it.

A comprehensive program has been implemented. Our field investigators monitor markets factories warehouses and wholesale stores. When they uncover such places manufacturing storing and/or selling counterfeit goods the appropriate authorities are informed and raids are conducted. All the fake products are then seized and destroyed.

Depending on the size of the wrongdoer we use all remedies available. That is everything from a cease-and-desist letter a search-and-seize order an order freezing the counterfeiter’s assets to a judgment against the counterfeiter and wherever possible we recover fake products records and money damages.

If the party appears to be one that warrants criminal action we interface directly with law enforcement authorities in the country to seek and encourage criminal prosecution of those who sell fakes.

We always measure our resources to be sure. Not everyone gets the same response but we move against everything. This is what we mean by "Zero Tolerance." No one should believe because they are relatively small they will not be found or not moved against.


To learn more about counterfeiting and its terrible effects you may visit the following links:

On an International scale

In the European Union

In the United States


Note: the above is not any recommendation or endorsement of any organization firm business legal or otherwise but is meant solely as a convenience to the reader.