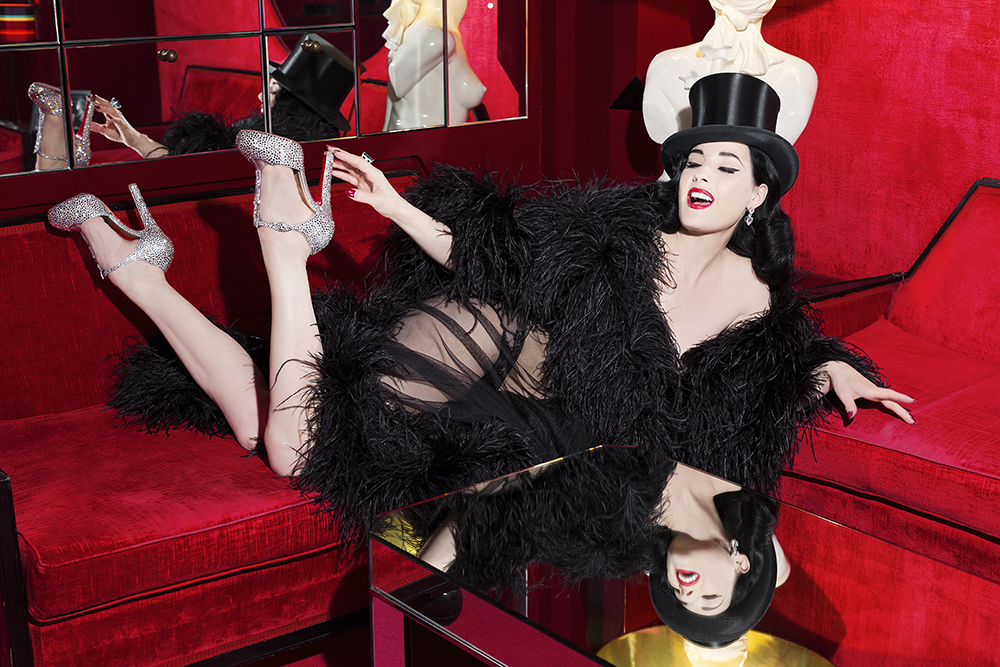 Dita Von Teese is no stranger to #LouboutinWorld; one of Christian’s dear friends, she has graced stages and red carpets around the world clad in red soles. And last month, she slipped into a few very special pairs for her return to the mythical Crazy Horse Paris stage in “Dita’s Crazy Show," staged in honor of the cabaret’s 65th anniversary. Christian and Dita devised seven pairs of custom shoes created specifically for the show’s five original acts, which were directed in collaboration with visual artist Ali Mahdavi. The shoes took into account every facet of the show, including the layout of the Crazy Horse stage; from width of heel to angles hit from the house lighting. 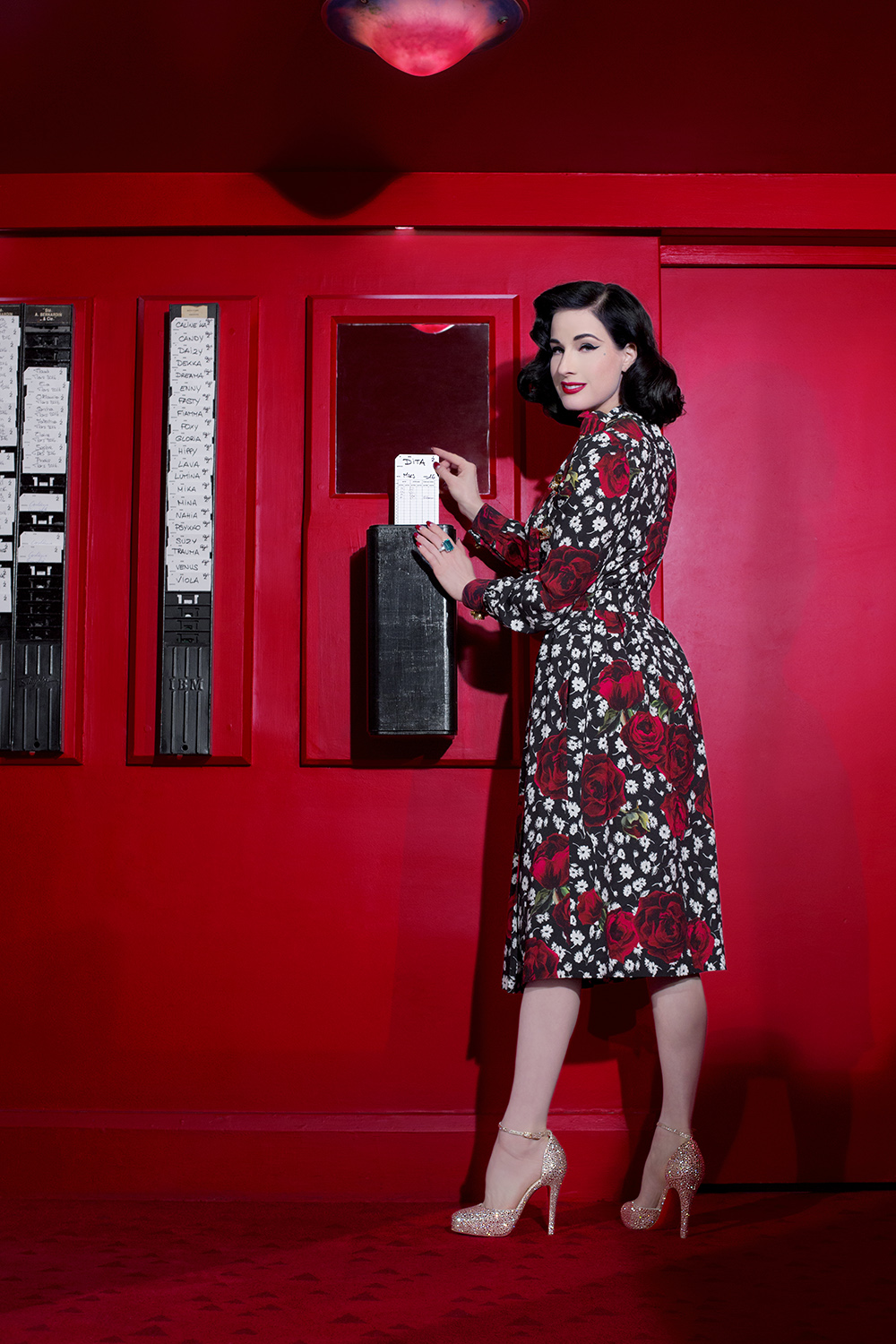 This month, Dita takes her act stateside again in the acclaimed “Strip, Strip, Hooray!” opening this week at the Avalon in Los Angeles, California. Select styles from the Crazy Horse show will make guest appearances throughout the tour.

Find out more about Dita’s one-of-a-kind burlesque shoes below! 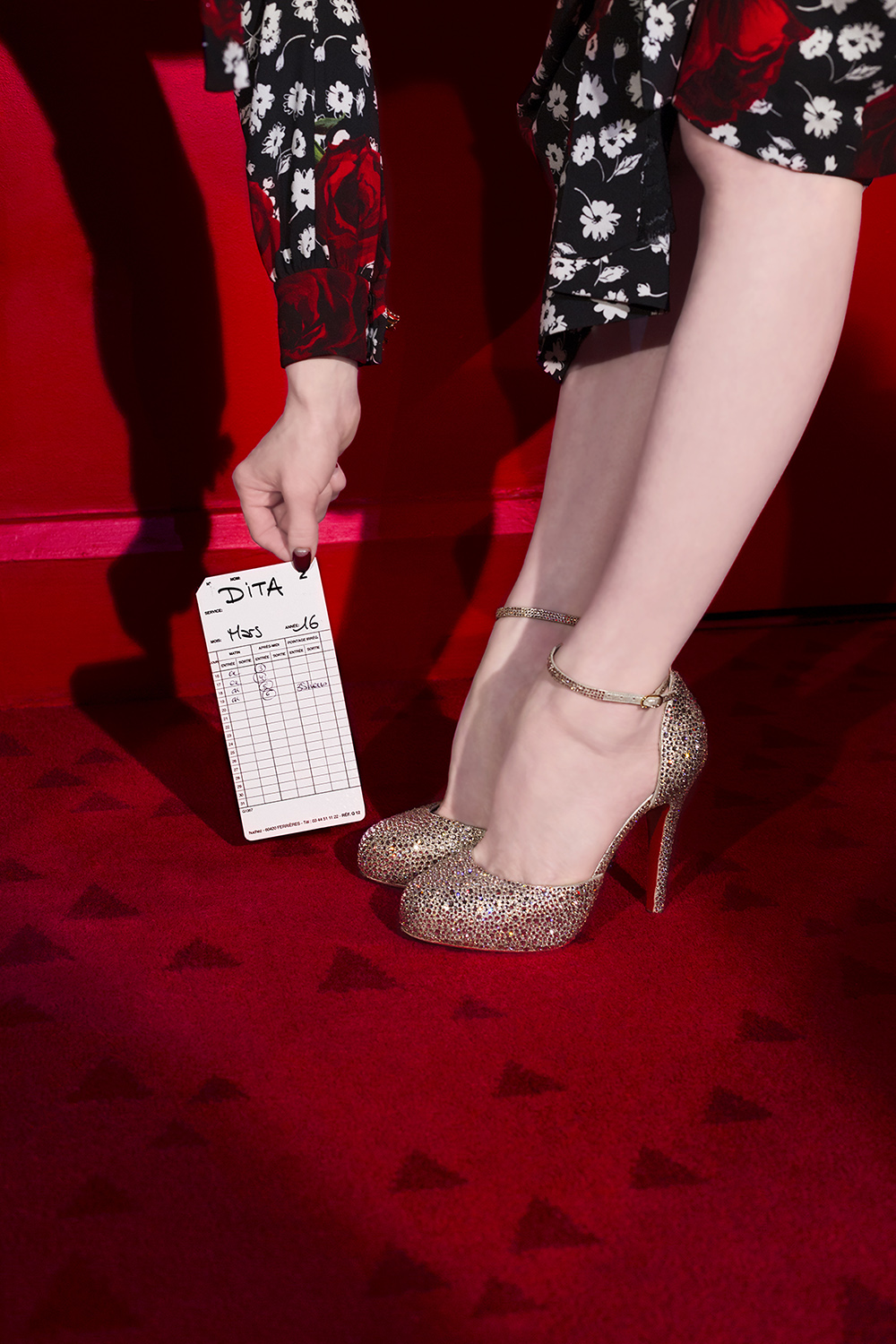 A staple shoe for Dita, Cat Woman 120, was modified with a thin ankle strap specifically to show up on a tableau-style projection. The strass on the shoe was created to imitate the silk of Dita’s gown created by couturier Zuhair Murad. 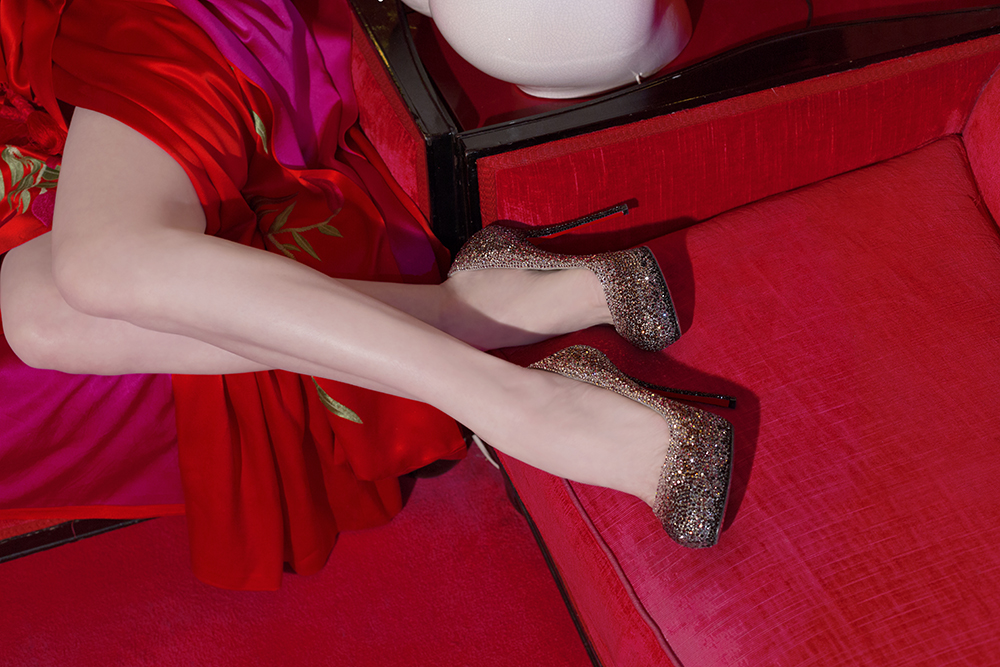 Merci Allen from the A/W 15 collection was adapted on Dita’s personal last. Following a dégradé  pattern to match the strass embroidery on her dress, Christian carefully re-proportioned the pattern of the shoe so that it was perfectly in line with the crystals of her gown. With its ultra-thin heel, the shoe is worn during Dita’s more stationary numbers. 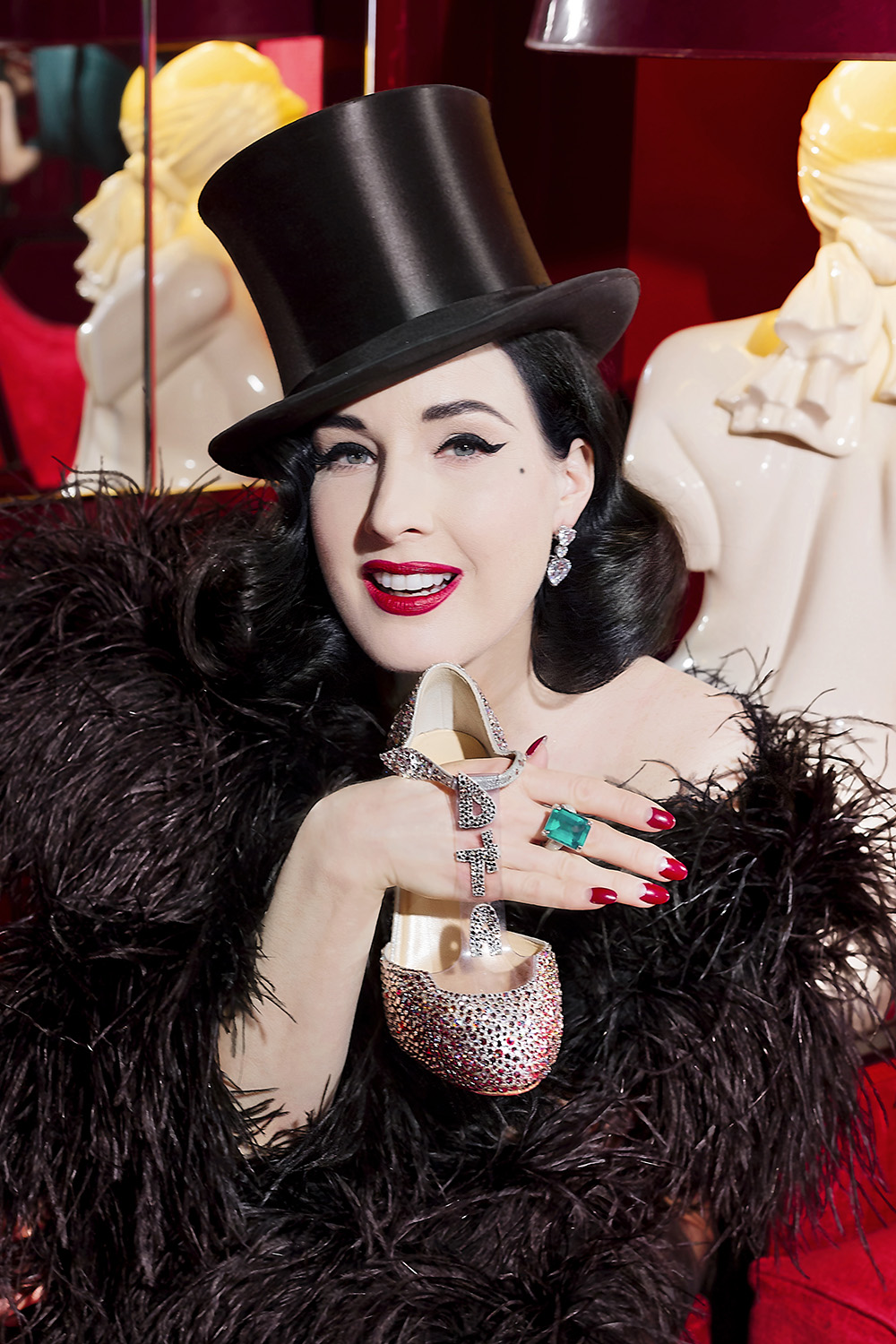 For this shoe, Christian sketched a brand new design at the atelier. Using a two-piece construction from the back of the shoe to the toe, the ankle strap and toe are held together by an invisible PVC strap, with the letters D-I-T-A emblazoned in gleaming strass. Crafted in Italy, the heel of the shoe was created specifically for Dita to dance in with more ease. It dons a chunkier heel to prevent her from falling into the small holes that line the stage at the Crazy Horse. 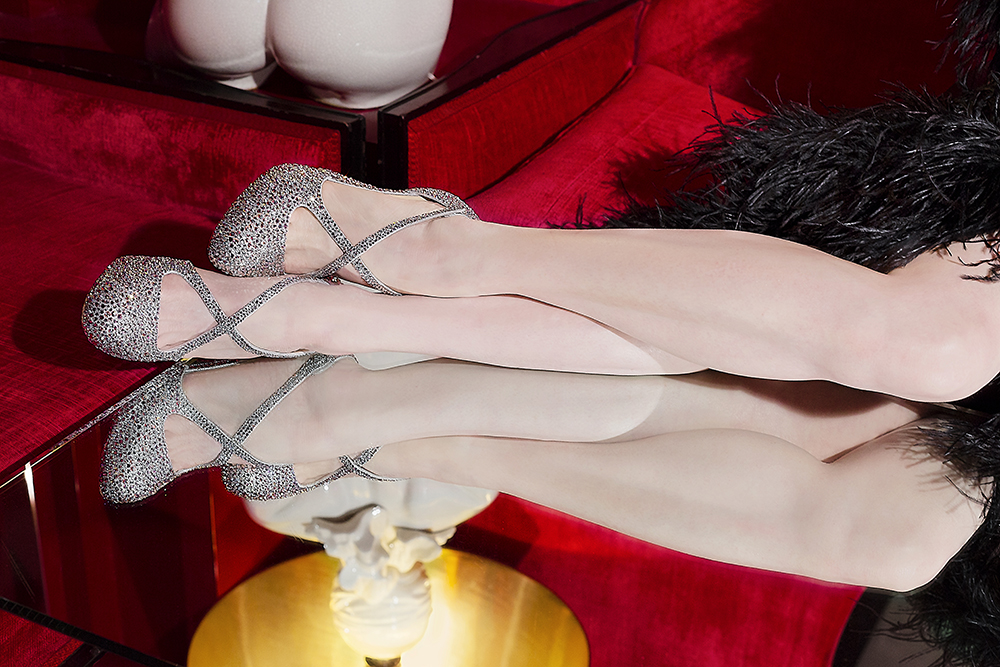 Dita’s favourite shoe, the criss-cross Vagalami, was customized in glistening, all-over silver strass to match another one of her dazzling gowns. 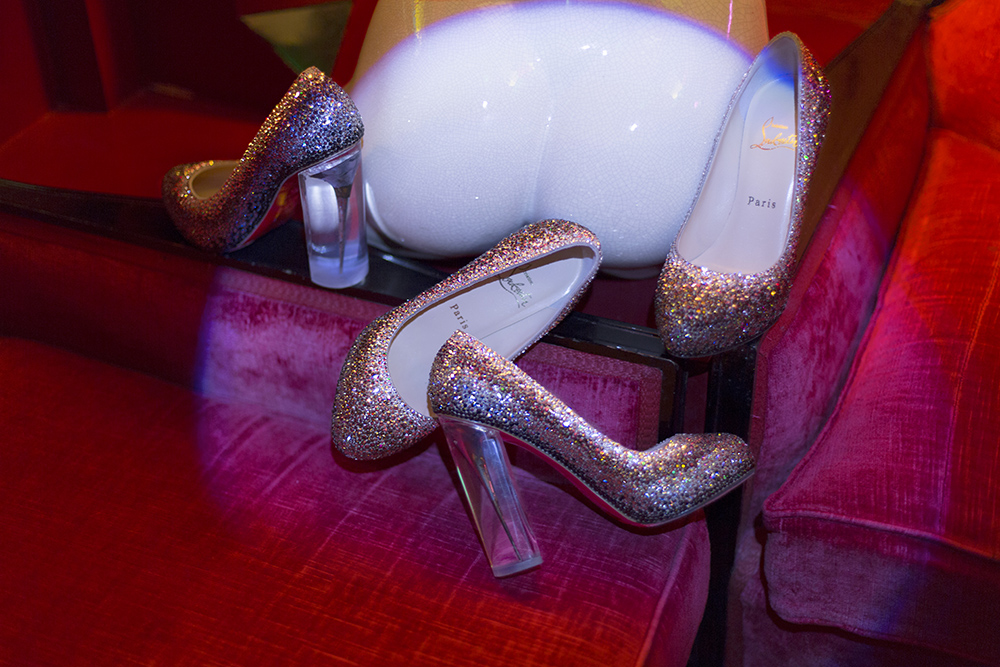 A trompe l'oeil design gives these shoes a powerful stage presence. Specially placed dégradé strass decorates the body of this rounded-toe style, while a single bronze spike rests inside of a chunky PVC heel that disappears when the cabaret lights illuminate Dita’s feet, giving the illusion she is dancing on spikes!